History of the development of Implant Mechanical Rescue

We are often asked how Dr. Mastrovich developed this particular expertise. Throughout his restorative and general dental career, Dr. Mastrovich was the ‘dentist to the dentists’, for his expertise with complex and difficult cases.

In 2009, after periodontists, oral surgeons, and implant company reps had asked him how he would solve the problems they were presented with periodically when a patient had an implant well integrated into the bone, that was unusable until the broken piece of an implant abutment or screw could be removed. Historically, these situations were addressed with the implant being removed, the site re-bone grafted (as needed), and then a new implant placed after healing. The doctors and reps who had asked him about those situations each had felt there had to be another way, but didn’t know how it could be accomplished. 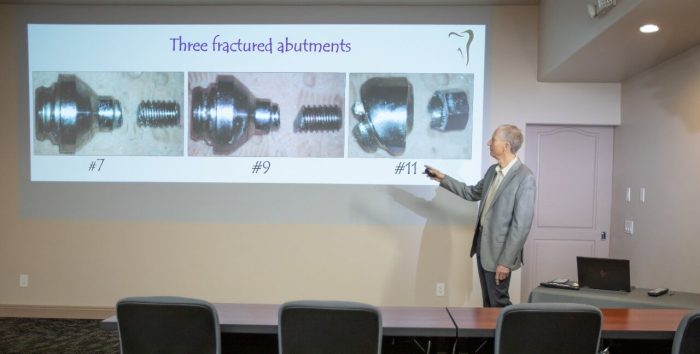 As Dr. Mastrovich analyzed, he recognized the first step would be better visualization of the inside of the implant as steps would be taken to remove the broken piece, with the goal of keeping the internal threads of the implant intact. Greater visualization than the 4x power dental loops used by most dentists, he reasoned, might be achieved by utilizing the 25x power clinical microscope used by the endodontists to have visualization inside the tooth root as they performed root canal treatment.  His endodontist colleague allowed Dr. Mastrovich to use the 25x power clinical microscope in his office on the Fridays he wasn’t treating his own patients, and Dr. Mastrovich proved that level of magnification to be a crucial first step in the rescue process.

As he quickly discovered, only a few implant companies had tools/kits, and those lacked the level of high precision necessary for working effectively inside the implant with the precision required for success, again with the goal of preserving internal implant threads so a new abutment or new screw could be placed for the restorative to be attached to. Once again, Dr. Mastrovich set out to solve the high precision tooling dilemma and it led to his creation of a micromachining lab where he designs, codes, and machines the custom high precision tooling specific to the implant systems, and often to the specific presenting parameters of the patient’s case.

Dr. Mastrovich has lectured and trained other dentists on the Implant Mechanical Rescue treatment principles, techniques and algorithms.

Our team is dedicated to providing a successful and safe mechanical rescue for patients and doctor referrals.
Contact us to get help today.
GET HELP
Go to Top
Accessibility by WAH